The Canadian Grapevine Certification Network's Board of Directors is composed of members from Canada's four established provincial grape growing organizations.

The CGCN Board of Directors holds meetings on the last Tuesday of each month to discuss relevant issues and administration of CGCN. If you wish to bring something to the attention of our Board of Directors, please get in touch.

The Canadian Grapevine Certification Network's Board of Directors

The following are the current voting members of the CGCN Board of Directors:

About the Chair of CGCN-RCCV 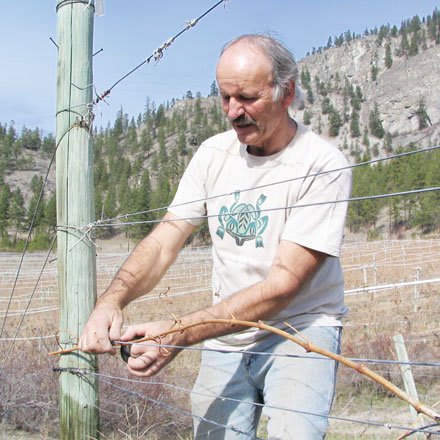 Hans Buchler has been growing grapes in the South Okanagan Valley in British Columbia since 1982. Hans, along with his wife and two daughters immigrated to Canada in 1981 after buying some previously undeveloped land in the Oliver area. He started to become involved in industry organizations in the late ‘80s. He became involved with the organic sector at the regional, Provincial and National levels, was board member on the BC Grape Marketing Board until it was decommissioned in 1995, and chaired the Research and Development committee of the BC Wine Institute until 2006 when the BC Wine Grape Council was formed to take over the R&D arm of the BC Wine Institute. Hans chaired the BC Wine Grape Council until 2013 and administered the GF2 research program for the provincial body after that. In 2017, Hans was elected Chair of the CGCN-RCCV.

"The CGCN-RCCV is beginning to play a lead role in the effort to limit the spread of various grapevine viruses by laying the groundwork for the production of certified virus free propagating material, that will enable industry to start replacing infected plants with healthy, virus tested and certified vines from Canadian sources.
I strongly believe that research plays an important role in supporting industry to adapt to ever changing environments, from consumer preferences to climate change, to growing need for sustainable production methods and ever-changing pest and disease complexes."