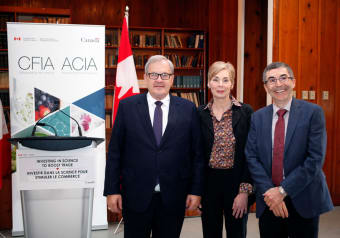 SIDNEY, BC, April 3, 2018 /CNW/ – The Canadian Food Inspection Agency (CFIA) relies on science to contribute to evidence-based decisions that protect Canada’s food, animal and plant resources. By supporting our country’s remarkable scientists and providing them the facilities they need, we are strengthening science and building a better tomorrow

Today, the Honourable Lawrence MacAulay, Canada’s Minister of Agriculture and Agri-Food, announced an investment of $80 million to replace the Centre for Plant Health in Sidney, B.C. The Centre is a CFIA diagnostic testing, research and quarantine facility, with both laboratories and greenhouses. This funding, a Budget 2017 commitment, complements recent federal investments in science and laboratory infrastructure proposed in Budget 2018. It also demonstrates the Government of Canada’s commitment to advancing science and research, supporting innovation and growing the economy.

The development of this world-class plant health research facility will provide CFIA scientists and partners with state-of-the-art facilities to advance plant science. Having the right tools is essential to help them develop and partner on new ideas and opportunities to protect and grow Canada’s agriculture and agri-food sector, as part of the Government’s goal of attaining $75 billion in agriculture and food exports by 2025.

The CFIA collaborated closely with the B.C. Ministry of Agriculture, a long-standing partner of the Centre for Plant Health, as well as other partners to develop a vision and business case for enhanced investment in the facility. The Centre will be developed over five years in continued collaboration with industry, provincial governments and academic partners, providing opportunities for the local community, the province and scientific partners across Canada.

“Science is the cornerstone of the Government’s plan to create good jobs in the agri-food sector and to grow the middle class. The new Centre for Plant Health will provide a space for researchers to advance plant science and develop innovative agriculture solutions for Canadians and to help grow the economy.”

“The Canadian Grapevine Certification Network (CGCN) is very pleased with the renewed commitment to plant health and research by the federal government. We expect that the modernized CFIA facility in Sidney will greatly contribute to the mitigation of many viral diseases and other pathogens that currently threaten the Canadian grape sector. A first-generation plant repository combined with state-of-the art diagnostic tools and research will greatly enhance the sustainability of many agriculture sectors in the country.”

“We applaud this investment by the federal government as it will enable BC’s leading scientists to apply novel technologies, like genomics, to critical agricultural issues such as invasive pathogens and viruses. Canadian import/export markets will be stronger and more competitive because of this investment.”

The Centre for Plant Health in Sidney, British Columbia, was established in 1912. The current facility comprises 48 buildings, mostly wood frame, greenhouses and screenhouses.

The Saanich Peninsula’s climate is suited for the culturing of all of Canada’s fruit crop and ornamental plants. The Centre maintains an impressive collection of cultivars, highlighting the diverse activities conducted on site.

Virus and other plant pathogen testing at the Centre is essential to informing the CFIA’s regulatory decisions and to protecting Canada’s agriculture and agri-food industry. The Centre has been instrumental in safeguarding against plum pox virus and other pests that can devastate crops. Its use of genetic testing has revolutionized how plant diseases are detected.The Centre for Plant Health performs regulatory science on primary agriculture that is exported around the world. This is significant because Canada’s agriculture and agri-food sector represents over $108 billion to our economy, including 58% which is from primary agriculture exports such as berries, tree fruit and grapes.

Budget 2018 proposes a historic investment of nearly $4 billion in support of research, researchers, and the equipment they need to succeed and create new technologies to diagnose disease earlier or new medicines to treat patients.