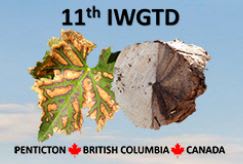 Abstracts of oral and poster presentations given at the 11th International Workshop on Grapevine Trunk Diseases, Penticton, BC, Canada, July 7-11, 2019

The 11th International Workshop on Grapevine Trunk Diseases (IWGTD) was held in Penticton, British Columbia, Canada, on July 7–12, 2019. This workshop was chaired by Dr. Úrbez-Torres and organized by the Agriculture and Agri-Food Canada Plant Pathology Laboratory at the Summerland Research and Development Centre (SuRDC). The 11th IWGTD also marked the 20th Anniversary of the workshop, which has been organized every two years since 1999. Delegates were presented the first day with an overview of the Okanagan Valley wine grape growing region of British Columbia by Dr. Bowen, Research Scientist and Plant Physiologist at the SuRDC.

The workshop was attended by 151 participants from 21 countries. In total, 64 oral and 48 poster papers were presented in four different sessions, including Pathogen Detection and Identification, Epidemiology, Host-Pathogen Interactions, and Disease Management. In addition, a special session on Grapevine Trunk Diseases (GTD) control was organized by the organizing committee the morning of Friday July the 12th with the goal to provide the industry and  grapegrowers with a practical summary and overview of the current management options against GTD as well as the economic impact they cause. The invited speakers for this session were Dr. Gramaje from the “Instituto de Ciencias de la Vid y el Vino (ICVV)” in Logroño, La Rioja, Spain, who presented an overview on GTD management in nurseries and newly established vineyards; Dr. Sosnowski from the South Australian Research and Development Institute (SARDI), who presented an overview on GTD management in mature vineyards; Dr. Kaplan from the California State University in Sacramento, who presented an overview on the economic consequences of GTD and the potential gains from adopting preventative pruning practices and vine surgery; and Dr. Úrbez-Torres from Agriculture and Agri-Food Canada SuRDC, who presented an overview of the current status of GTD in Canada and their control.

Two field trips were organized during the workshop. The first field trip took place on the afternoon of July 9th with visit to vineyards in the North Okanagan. Delegates were presented with an overview of grapevine production in the Okanagan Valley followed by discussions on the main diseases affecting grapevines in the Valley, including GTD and visit to experimental trials where the SuRDC Plant Pathology team were conducting GTD spore trapping studies within the epidemiological research being conducted in British Columbia for GTD. The second field trip took place all day of July 11th and delegates visited two vineyards located in the South Okanagan Valley. The field trip was focused on presenting the current situation of GTD in The Okanagan Valley and management strategies being put in place.

It is worth to highlight that a student competition with awards to best oral and poster presentations was organized at the 11th IWGTD. This is the first time that such competition has been organized for the IWGTD. A total of 20 graduate students (MSC or PhD) participated in the competition. For best poster presentations, 1st place went to Pierluigi Reveglia, a joint PhD student between Charles Sturt University, Wagga Wagga, New South Wales, Australia and the University of Naples, Italy, for his paper “Isolation and characterisation of phytotoxins produced by the Botryosphaeriaceae and their role in grapevine trunk diseases”; 2nd place went to Edelweiss Rangel Montoya from the “Centro de Investigación Científica y de Educación Superior de Ensenada”, Baja California, Mexico for her paper “Characterization of species of Lasiodiplodia associated with grapevines in Mexico”; and 3rd place went to Daina Grinbergs from the “Instituto Nacional de Investigaciones Agropecuarias”, Chillán, Chile for her paper “Fungal pathogens associated to grapevine trunk diseases from patrimonial vineyards in Chile”. For best oral presentations, 1st place went to Jinxz Flamand from Agriculture and Agri-Food Canada Summerland RDC for his paper “Identification and characterization of potential biocontrol agents for the management of grapevine trunk diseases in British Columbia”; 2nd place went to Clément Labois from “Université de Haute-Alsace” Colmar, France for his presentation “Metabolomic studies of two V. 396 11th International Workshop on Grapevine Trunk Diseases, Penticton, British Columbia, Canada, July 7-12, 2019 vinifera subspecies during infection by Neofusicoccum parvum, a Botryosphaeria dieback pathogen – On the road to identify infection and resistance biomarkers”; and 3rd place went to María del Pilar Martínez-Diz from the “Estación de Viticultura e Enoloxía de Galicia” Ourense, Spain for her paper “Natural infections of pruning wounds by fungal trunk pathogens in mature vineyards in Galicia (northwest Spain)”.

The next 12th IWGTD will be held in Czech Republic in 2022 as the Council Members of the ICGTD decided that from now on the IWGTD will be organized every three years. Invited lecture to celebrate the 20th anniversary of the International Council on Grapevine Trunk Diseases and Workshops